Recently I started working on some analysis about Italy as most favorite destination for main target of tourists from East Asia in particular chinese, japanese and south korean users. To demonstrate it we should just consider that Italy is 1st country in EU-zone for number of nights spent by asian people (2,8 millions of nights by chinese, 2,8 millions of night by japanese and 800 thousands by koreans – source Unioncamere)

It’s common for marketing advisor to spend some hours x day on researches that may concern strategies on providing business services for specific market’s segments trying to figure out the method which companies consolidate their brand / services with promotion.

I decided to put on comparison some important players involved on services for tourism and I’m not only referring  about tour operators but I’ve also included in my prospect some national agencies (government) that operate in tourism industry like JNTO (Japan National Tourism Association) or Official Korea Tourism Organization.

Usually such kind of public agencies are mainly focused on attraction of foreign tourists toward their countries so they are well specialized on own territorial marketing. But if we consider the contents introduced through their websites about Milano EXPO 2015 in occasion of announcements about delegations or packages for business groups we can understand how promotion of Italy, in particolar of Milan, boosted following some key- value points, has been adopted by these agencies as functional method to make on focus some features of their country.

In particular, using this retrospective method of analysis I would like to explain the functionality that an integrated strategy for national tourism can have if managed with well framed marketing tools based on some specific elements like

1) History: Italy represents for asian users the center of Europe for that it may concern its origins. Rome for example is one of most important cities in the world for chinese political representatives and it’s considered the valid scenario to introduce bilateral issues (China – Europe) due of long history generated by roman empire and chinese dynasties in two part of the world that for long time have been considered like yin and yang of our globe, west and east. Lot of delegations are coming to Milan to present territorial focuses during EXPO and on doing so they are also introducing new cooperation’s opportunities in some specific areas of fresh developed China.

2) Food: italian agro-food’s system dominates the international markets. According with recent research by Coldiretti we got primate of exportation in the world for more than 20 classifies of products and we are in the second and third place for more than other 54 classifies. But pretty interesting is the first place we received thanking innovation, as it has been implemented for biologic production recently by more than 43.000 companies, that represent 17% of european players. These successful results are introduced  in many articles and scientific argumentations posted on some websites of japanese prefectures in the sections that refer to delegations that are joining Milan EXPO 2015,

3) Creativity: Milan is the capital of creativity according with official statement signed by korean ministry for trade and development during important anniversary that celebrated in Milan 150 years of bilateral relations between Italy and Korea (6 june 2014). And when we talk about italian creativity usually we think about arts, design, fashion but in last report issued by ISTAT and Eurostat, Italy is the first country in Europe that adopted creative skills for optimization of dynamics inside corporate governance and to regulate production in innovative and efficient way as well (more than 60% of companies in the survey declared the involvement of creative personalities in their corporate-assets)

We can easily understand as Milan EXPO well combines in its programs and entertainment’s structure some high value elements like history, creativity, quality, and of course food (introduced by main topic of Expo like energy for life and for the planet) that are featured as default’s contents in many strategic plans of companies and agencies specialized in services for tourism.

Thanking of this combination of elements we’ve been able to reach immediately great target of diversified users like those, in particular from East Asia, want try and enjoy Italy in the shape they always studied, imagined or, why not, tasted even only once in their life.

Milano got the big opportunity to experiment how to make this big structure (EXPO) moving ahead for 6 months with participation of well framed operators and cooperation of public offices with private organization and thanking concrete action boosted by all social counterparts for the first time we improved the awareness of potentiality that such diversified structure and skills put in sharing can offer to our Nation and economy.

Now we have to continue to consider that to re-launch Italy we needs definitely an organic system for tourism and hospitality in general where cooperation with strategic segments can be a fundamental base to provide high level services and meet international needs.

As consulting company and no profit organization i’m in charge of we are following this perspectives on two different ways. About business solutions we are developing marketing events inside some prestigious hotels in Milano making as main target of the program international guests.

We are selecting operators from food and tourism industry and we are arranging calendar of contents that we are going to communicate on social networks and online using directly some interfaces well known in Asia and not so common in usual online campaigns. It’s important for us to associate online marketing tools with concrete offline occasions to promote and meet potential clients. At the same time the companies are joining the project can receive special visibility as creators of promotional event in Milan during Milano EXPO.  http://fuoriexpo2015.eventsmilano.com

At the same time we are boosting international participation for those aspects may concern creativity as key value for italian economy in particular for Milan city. Recently we produced international cross cultural contest in cooperation with Milano Expo and during the Gala Night for the assignment of the awards we introduced a new board aimed to concentrate and develop proposals about youth international creativity in Milano. 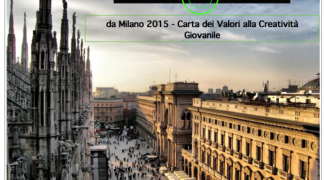 This group of creative personalities joined for the constitution of Charter of Values for Youth Creativity that has been presented to the institutions which are aware of our intentions for creation of cooperation’s network on this theme.

We are already planning calendar with productions and contents starting by september 2015 and we’ll follow the mentioned strategy to assure  international participation as featured characteristics of our agenda.